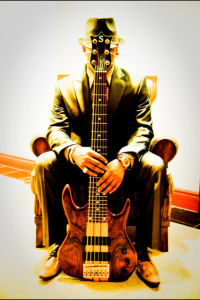 In 2009 Antone’ produced the contemporary jazz album entitled “New Beginnings” by Skii Johnson.  The album was #1 for two weeks and in the top 5 for 2 1/2 months on Billboard.
In February 2011, Chooky released his current album “Bassically Chook” live at the Kennedy Center on the Millennium Stage.  The album features various genres of music with an urban contemporary jazz foundation. www.gkamrecords.com